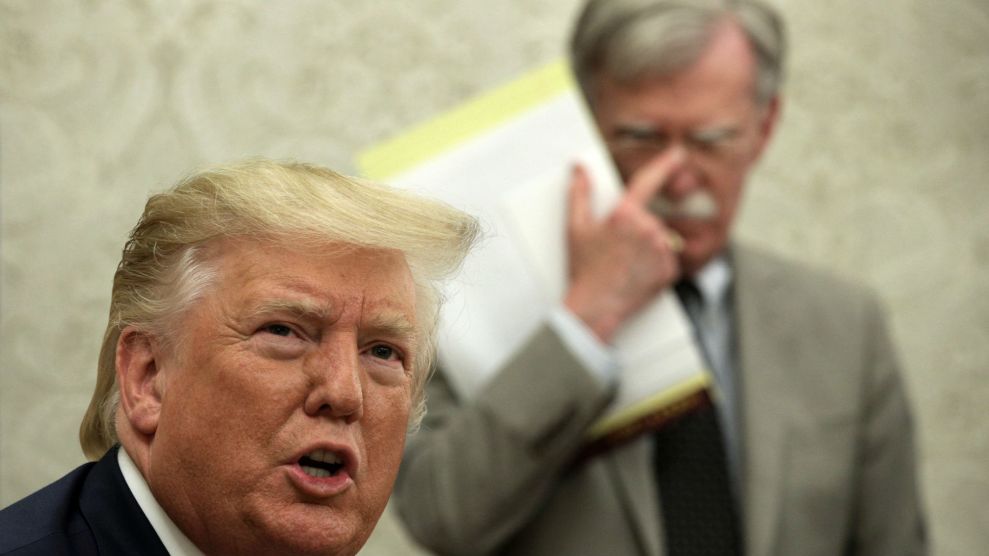 The New York Times reported Friday that former national security adviser John Bolton in an unpublished book manuscript says President Donald Trump personally asked him to help pressure Ukraine to launch investigations that would help Trump politically. According to the paper, Bolton wrote that Trump told him to urge the incoming president of Ukraine to “meet with [Rudy] Giuliani, who was planning a trip to Ukraine to discuss the investigations that the president sought.” After the story appeared, Trump issued a statement flatly denying Bolton’s reported claim.

“I never instructed John Bolton to set up a meeting for Rudy Giuliani, one of the greatest corruption fighters in America and by far the greatest mayor in the history of N.Y.C., to meet with President Zelensky,” Trump said in a statement to the Times. “That meeting never happened.”

The back-and-forth follows a similar exchange earlier this week. After the Times reported that Bolton had written that Trump had told him he wanted to continue withholding military aid to Ukraine until Ukraine helped investigate the Bidens, Trump denied that allegation, too.

Trump and Bolton are now effectively in a public fight over facts at the heart of Trump’s impeachment trial. Democratic impeachment managers on Friday made the obvious point that this shows why the Senate ought to subpoena Bolton, a step key GOP senators just made clear they will not allow. Trump’s public commentary after all, undermines any claim that Bolton’s testimony would jeopardize national security or be subject to executive privilege.

“A denial in 280 characters is not the same as testimony under oath,” Rep. Jason Crow (D-Colo.) one the House impeachment managers, said Friday afternoon.

But Trump’s denial also highlights something that has gotten remarkably little attention: Trump could testify. Bill Clinton’s 1998 grand jury testimony, after all, was key evidence in his impeachment trial. The House never sought Trump’s testimony, because he would have refused. After all, his lawyers stonewalled all House requests for documents and witnesses. Trump refused to agree to be interviewed by special counsel Robert Mueller and then likely lied in written answers to Mueller’s team.

But now Trump is on trial. In a normal trial, jurors would hear from witnesses. A defendant might even choose to take the stand in his own defense. That Trump is publicly sparring with a witness that Senate Republicans refuse to call shows what a farce the impeachment trial has become.