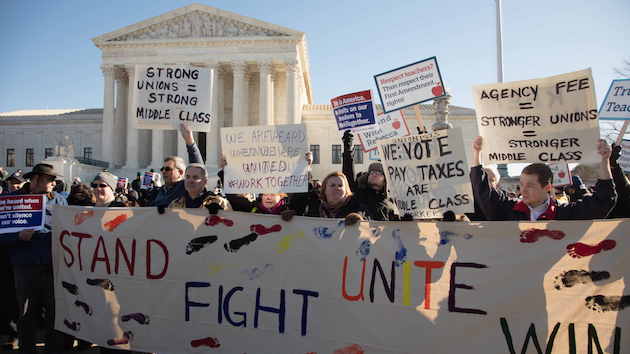 Pro-union activists rally in front of the Supreme Court on January 11.Jeff Malet/ZUMA

The Supreme Court deadlocked on Tuesday for the second time since the death of Justice Antonin Scalia last month—and this time, public sector unions were the winner.

The 4-4 split underscores the immediate impact of Scalia’s death and the new reality of a divided eight-member court. Senate Republicans have so far refused to consider President Barack Obama’s nomination of Merrick Garland to replace Scalia.

Before Scalia’s death, the conservative majority on the Supreme Court was poised to strike a “mortal blow” to public sector unions, long a target of the conservative movement. A conservative legal group brought Friedrichs v. California Teachers Association to stop unions from collecting compulsory fees from nonunion employees covered by collective bargaining agreements. The case aimed to weaken unions’ political sway by driving down union membership and decimating union coffers.

The conservative group behind the case brought it knowing that it likely had a 5-4 majority on its side. After oral arguments in January, the Supreme Court appeared ready to rule against unions. But Scalia’s death changed that. As Mother Jones‘ Stephanie Mencimer predicted after the justice’s passing, “Perhaps the biggest beneficiaries of Scalia’s death are public sector unions.”

The split leaves in place a lower court ruling in favor of the labor unions and demonstrates how the union opponents’ strategy has backfired. When they still had a likely 5-4 majority on their side, the union opponents had rushed the case to the Supreme Court by asking the 9th Circuit Court of Appeals to rule against them quickly in 2013. The 9th Circuit complied—but the Supreme Court’s ruling came a month and a half too late.