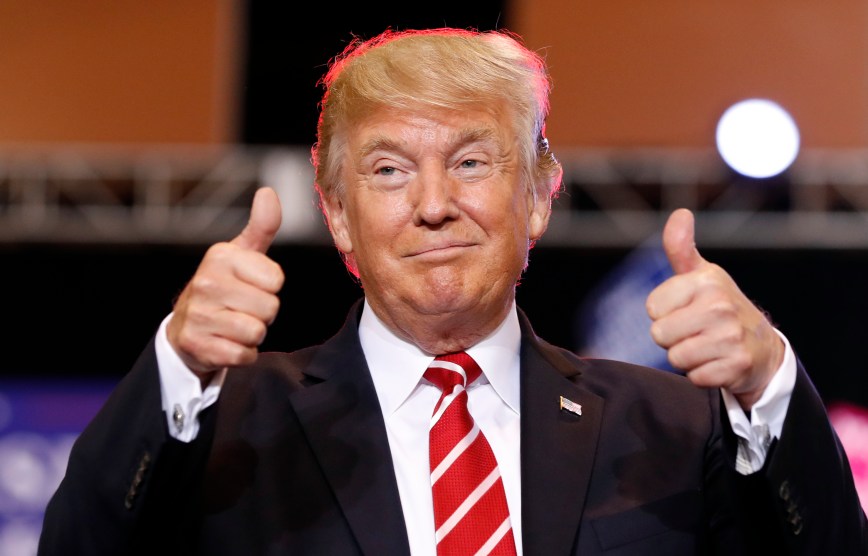 President Donald Trump at a rally in Phoenix, Arizona.Alex Brandon/AP

That’s all for now, folks. Tomorrow, Trump heads to Reno, Nevada to speak at the American Legion Convention.

After Trump’s rally, the scene outside the Phoenix Convention Center quickly devolved, with police reportedly deploying tear gas on protesters.

Don Lemon: "What we have witnessed was a total eclipse of the facts." pic.twitter.com/d5uWkDfGB9

Trump promises to pass the “first major tax reform in over 30 years,” saying that if the Democrats in Congress don’t support his measures, they’ll be “stopping you from getting a massive tax cut.”

"They're taking out coal, they're gonna clean it"

The president touched on his “fire and fury” comments earlier this month regarding North Korea. “What i said, that’s not strong enough,” said Trump, adding, “I respect the fact that I believe [Kim Jong-un] is starting to respect us.”

Trump called for getting rid of the filibuster rule, saying “if we don’t the Republicans will never get anything passed,” and bemoaned the close Senate vote on the Republican health bill. “I will not mention any names,” he said, hinting at Arizona Sen. John McCain, who cast a crucial “no” vote on the legislation.

Trump touted his crackdown on sanctuary cities and pushed for a wall on the southern border. He vowed to build the wall even “if we have to close down our government.”

Trump all but guaranteed a pardon for former Maricopa County Sheriff Joe Arpaio, who was convicted last month of criminal contempt for defying a judge’s order to stop targeting immigrants for traffic stops. “Sheriff Joe can feel good,” he told the crowd.

“They’re trying to take away our history and our heritage,” Trump says, adding that “the only people giving a platform to these hate groups are the media and fake news.”

Trump says he think jobs can have a “tremendously positive impact on race relations,” pointing to the “over 1 million jobs” he’s created since entering office.

President Donald Trump is holding a “Make America Great Again” rally at 7 p.m. PT tonight in Phoenix, Arizona. Hundreds of people lined up outside the city’s convention center—some before dawn—to hear Trump speak at his first major political event since the deadly protests in Charlottesville, Va. on August 12.

The rally’s first speakers were Secretary of Housing and Urban Development—and the only black member of Trump’s cabinet—Ben Carson, as well as Alveda King, Martin Luther King, Jr.’s niece.

After taking the podium, Trump blamed the media for mischaracterizing the statements he made following the Charlottesville protests. “They don’t report the facts….Just like they don’t want to report that I spoke out strongly against…Neo-Nazis, white supremacists, and the KKK.” He then proceeded to read portions of the statements he made following the protests, notably omitting the times he noted the bigotry “on many sides” of the protests.

Phoenix Mayor Greg Stanton called on Trump yesterday to delay his rally. “America is hurting. And it is hurting largely because Trump has doused racial tensions with gasoline,” he wrote, pointing to Trump’s reaction to the violence in Charlottesville.

Many suspected that Trump would use the rally to pardon former Maricopa County Sheriff Joe Arpaio—a pardon Trump said last week he was “seriously considering.” Arpaio, who campaigned for Trump in 2016, was convicted last month of criminal contempt for defying a judge’s order to stop targeting immigrants for traffic stops. Press Secretary Sarah Huckabee Sanders quelled that suspicion earlier today. “I can tell you that there will be no discussion of that today at any point, and no action will be taken on that front at any time today,” she said on Air Force One as Trump took off for the speech.

Nearly a dozen protests of the rally were planned by various immigrant rights, anti-fascist, and civil rights groups. The Associated Press reports that some protesters and Trump supporters have shoved and shouted at each other before the event.

At least one group of protesters has brought guns:

Several groups of bikers are also here at the Trump rally to make sure supporters feel safe, they say pic.twitter.com/7qjSNyJ6fB

Vince Ansel with “Bikers for Trump” says, “Nobody is going to get assaulted as long as we’re here.” #trumpinphoenix pic.twitter.com/YhuVDaQmZ4

And others brought signs:

Crowd of 1000+ with Puente Human Rights Movement on the move to #TrumpinPHX#TrumpRally@azcentralpic.twitter.com/LFRicTgcAH

Motorcade for @realDonaldTrump and @VP rolls into Paradise Valley. #AZfamilypic.twitter.com/uyaf32pjxo