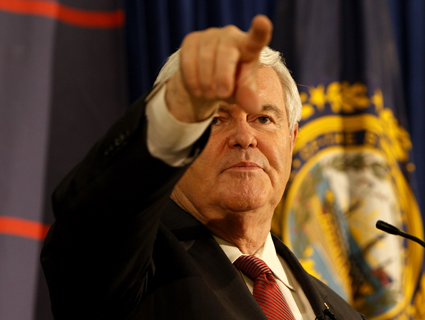 Newt Gingrich led Republicans into power in 1994 on the promise of sweeping, transformational change—entire departments would be eliminated or consolidated, taxes would be slashed, the “corrupt welfare state” would be a thing of the past. That didn’t quite work out. So as conservatives sought to keep their grip on Congress two years later, Gingrich instead sought to win the hearts and minds of voters through props.

Leading up to the 1996 election, Gingrich criss-crossed the country brandishing a white bucket, as a symbol of how Gingrich had cut bureaucratic waste by eliminating an anachronistic ice delivery service to congressional offices. Dating back to before the advent of refrigeration, ice had been delivered via white buckets to each office twice a day at no cost. Gingrich boasted that the program had cut $400,000 per year from the federal budget by eliminating 23 paid staff positions. “If there was any one symbol I wish we could be remembered by, I believe it should be an ice bucket,” Gingrich said at the time. “We didn’t authorize a study, we didn’t phase it out, we didn’t call for a training program, we just went cold turkey.”

“If there was any one symbol I wish we could be remembered by, I believe it should be an ice bucket,” said Gingrich.

It was, to be sure, an absurd perk. One Democratic aide told the New York Times in 1994 that, “We tried to get it stopped, but it keeps coming—from the ice machine in the heavens, I guess”; the paper found no compelling reason why the deliveries still continued, but noted that Hill sources said “it is unacceptable for lawmakers to drink warm soda.”

But, bucket-tour notwithstanding, Gingrich didn’t actually end the free ice service at the Capitol; he just created a new system. Under Gingrich’s watchful eye, Congress set up five ice distribution centers around the Capitol complex, so that staffers could haul their daily load of ice back to the offices. The ice was still free, in other words, and it was still being distributed. According to Roll Call at the time, Gingrich was himself taking advantage of the free ice entitlement he derided, dispatching a staffer to the ice distribution center twice a day to fill a bucket. And he wasn’t the only politician making the ice bucket a campaign issue. His Democratic opponent in 1996, Michael Coles, duly noted that while the Speaker had chipped $400,000 off the ice entitlement block, “Mr. Gingrich increased his office budget by $600,000—a difference, measured in ice terms, of more than 130,000 bags of ice.”