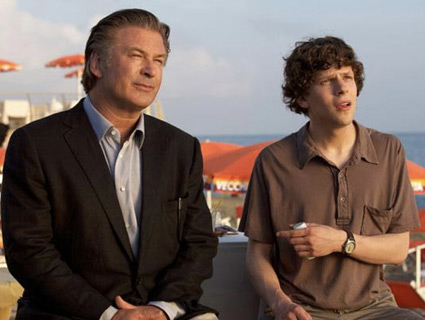 Woody Allen’s new movie, quite frankly, sucks. As is true with too much of Allen’s 21st century output, it trudges along as a mash-up of the director’s less inspired flights of fancy. If you cobbled together various pieces of used scratch paper from the floor of Woody Allen’s office, taped the scraps together with little-to-zero discipline, and tacked on an extra dose of tired surrealism, you’d get something along the lines of To Rome With Love—a sorry little movie that is at its very best playfully self-indulgent, and at its worst hellishly self-indulgent.

I could recap the synopsis for you now, but I’m instead outsourcing most of that work to this guy at LA Weekly. Suffice it to say that the movie takes place in (you guessed it) Rome. Through a ragbag of strained vignettes, the film weaves together disparate tales of infidelity, opera, fame, infidelity, love, more infidelity, disillusionment, and infidelity. The ensemble cast is top-notch, with a disarming blend of sex, smarts, and suave befitting a movie of far greater worth. But because of the overflow of competing plotlines, none of the star players (particularly Ellen Page as a seductive pseduo-intellectual who specializes in the “perversion of the dialectic”) get the screen time they’re due.

And instead of building off any momentum from last year’s critically hailed Midnight in Paris, Allen falls back into recycling elements from his lackluster work (2004’s Melinda and Melinda, 2008’s Vicky Cristina Barcelona, and 2009’s Whatever Works come to mind), in which his trademark wit and neurosis are subject to rapidly diminishing returns. For all the self-depracating, anxious humor—laced with plenty of references to Russian literature, left-wing politics, and Freud—To Rome With Love doesn’t produce a single memorable one-liner, nor does it offer any arousing farce. It’s assembly-line Woody Allen that doesn’t offer anything new or mangage to spice up the well-worn.

The silver lining? The film is a mild improvement over the some other recent American films set in Rome.

If you’re headed to the art-house theater this weekend, you’re better off going with the poignant and achingly funny Seeking a Friend for the End of the World instead.

To Rome With Love gets a limited release on Friday, June 22. The film is rated R for some sexual references. Click here to get local showtimes and tickets.