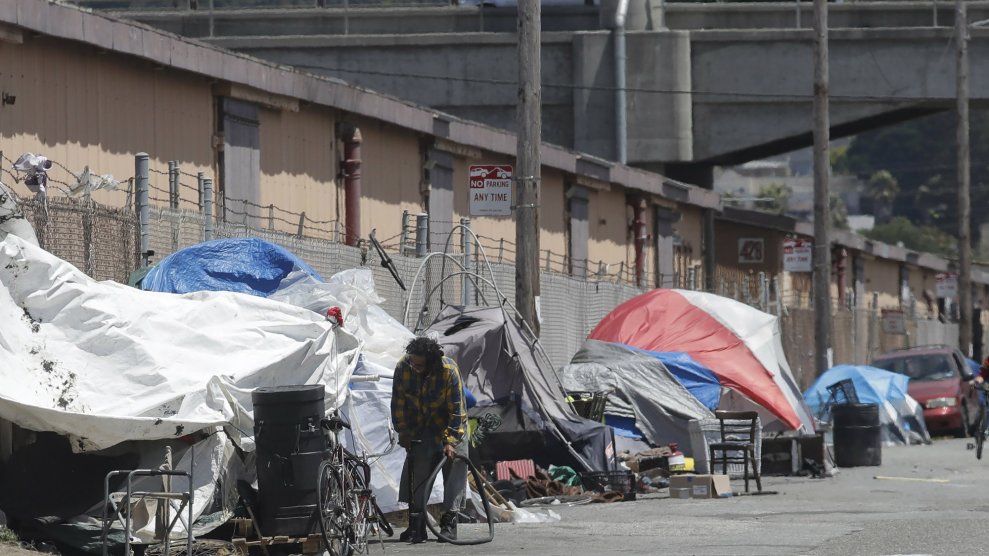 “I’m feeling unprepared, we’re at the mercy out here,” Ayat Jalal, a person living at a homeless encampment in Berkley, California told Berkeleyside last week. “The coronavirus, like the fires that happened, keep showing us that we who are out here, against the elements, face every threat first before society.”

Starting in the early hours of Tuesday, six counties in the San Francisco area announced a shelter-in-place order for those who live there. Until April 7, 6.7 million residents are being asked to stay inside and only leave their homes to stock up on essential supplies like groceries or medicine. It’s the latest drastic measure to attempt to slow the spread of COVID-19, the disease caused by the new coronavirus which has infected approximately 4,500 people in the US, the death toll currently stands at 86 and both numbers are expected to rise as testing becomes more widely available.

As businesses scrambled to close and residents prepared to hunker down, the California government announced that the order does not apply to the approximately 25,000 people experiencing homelessness in the affected counties. But government officials were urging all homeless people to head to a homeless shelter. The Centers for Disease Control and Prevention is directing the public to use frequent hand-washing or hand sanitizer as one strategy to protect themselves from infection and to self-quarantine if one feels symptoms like fever or a cough. Of course, those simple steps are close to impossible for the unsheltered.

California’s effort to move homeless people to shelters can present other risks, since shelters can be crowded and usually are not built with areas for quarantine. The CDC released guidelines for homeless shelters during the pandemic which includes screening for coronavirus symptoms such as fever and cough, isolating anyone who becomes sick, and notifying public health departments of any suspected cases. But experts wonder if outside may be preferable to crowded indoor conditions.

“You want people inside, out of their tents and encampments, so they can get critical services and potentially better access to health care,” Philip Mangano, president and CEO of the American Round Table to Abolish Homelessness, told the Washington Post. “But with the coronavirus, is that the healthier option for them? People outside may be able to accomplish social distancing and self-quarantining, rather than being cloistered together.”

A state-by-state or city-by-city effort may not be enough. “Local and national health officials are concerned there could be an outbreak of coronavirus among the homeless population within the week. Shelters aren’t prepared, and don’t have resources to get ready.” Diane Yentel, the CEO and President of the National Low Income Housing Coalition tweeted on Sunday night.

Some cities are setting up hand-washing stations for unsheltered people. “Our Public Health Division and Emergency Operations Center has been working diligently to protect our most vulnerable residents from COVID-19,” Berkeley, California Mayor Jesse Arreguín said in a statement, “including those who are unhoused by providing sanitation equipment to encampments.” The city set up an additional 20 hand-washing stations, bringing the total to 28. Hundreds of unhoused people were given kits containing hand sanitizer and pamphlets with coronavirus information. Residents at an encampment welcomed the extra hand-washing stations. “I feel like [the city] is trying the best they can, especially with sending representatives this morning,” Nicholas Alexander told Berkeleyside.

Across the country, other cities are implementing similar measures. In Denver, city workers are passing out hand sanitizer and relaying information about the coronavirus outbreaks to people living on the streets. But for other cities, the distribution of hand sanitizer is not considered to be the best practice.

In New York City, for instance, where there are at least 329 confirmed cases of coronavirus, city officials are discouraging giving hand sanitizer to unsheltered people because the worry that this measure actually will keep them from going to shelters. New York City’s policy is to get homeless people to move into shelters as opposed to staying on the street. However, many homeless people report that shelters can be unsafe or even dangerous. “The least we can do is give them hand sanitizer and clothes because of all times, now is the time to do it,” Josh Dean, co-founder of Human.nyc, a homeless outreach organization, told the City an independent nonprofit news outlet.

In addition, there are serious concerns about the staff in the shelters. As Yentel noted:

Shelters are starting to lose staff to illness – they’re themselves sick or can’t work because they’re caring for someone who is. Volunteers aren’t showing up for shifts. Shelters needs to hire more staff to cover all these shifts, but don’t have $ to do it.

The bottom line, she wrote, is, “Homeless shelter and service providers need money—a lot of it—and they need it right now.” But Congress’ emergency spending bill to combat the virus does not include any funding for homeless services. “Senators must ensure current emergency spending bill provides money to protect against an outbreak of coronavirus among homeless people,” Yentel’s tweets continued. “This is not only a moral imperative; it’s an urgent public health necessity.”